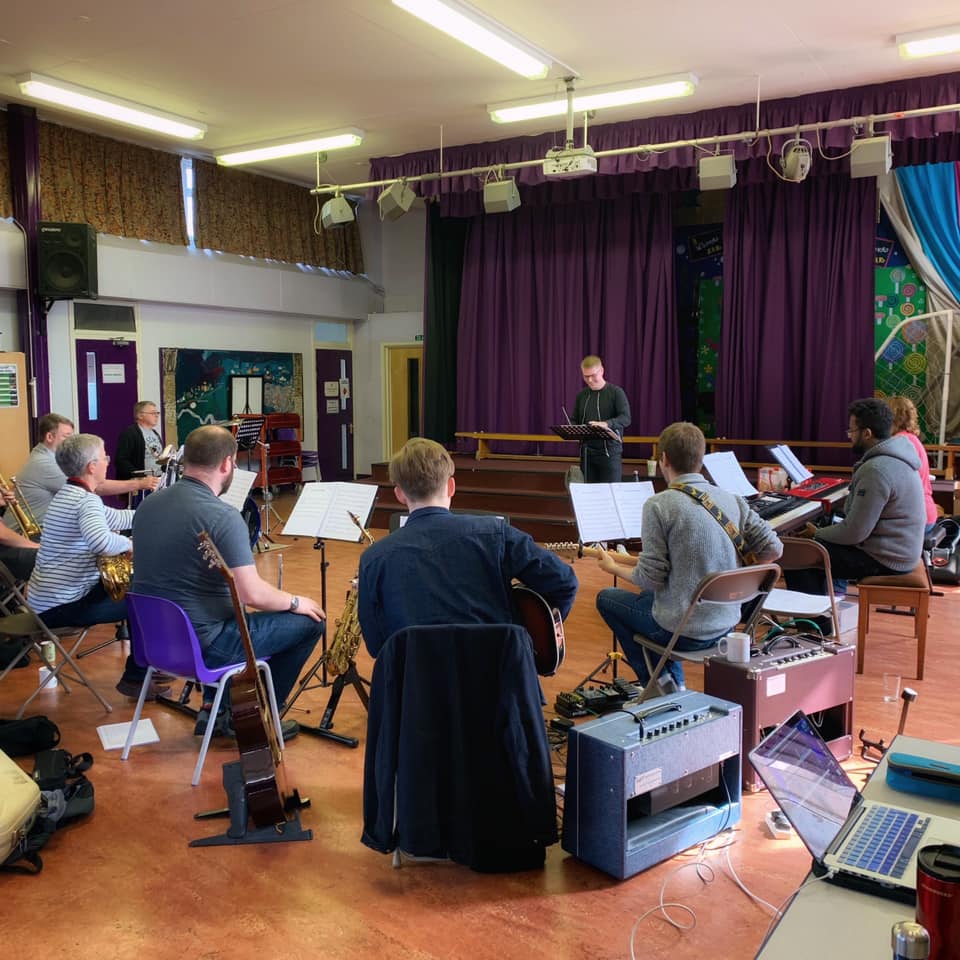 ALL SHOOK UP’S BEHIND THE SCENES HEROES

With only three days till opening night we sat down with our very own Sam Blyth who has stepped up to conduct for the first time – we could not be prouder, he’s absolutely killing it! Here’s a little interview with him…

What made you want to conduct?

I have been playing the drums and piano for about 10 years now and this gives me the ability to understand the notation and rhythm of the score. I have been both on-stage and back-stage but the music is my biggest passion so I decided to explore something that I’ve been wanting to do for years, conducting.

What is it about All Shook Up that you like?

The music for me is the most exciting part of a show, there is so much variety of expression that both the band and the cast bring that really set the tone for the this musical.
All Shook Up is a complex show that needs a strong musical section and LODS definitely deliver this. They’re renowned for their exceptional “LODS sound”.

Having never conducted a show before, ASU was a nice introduction into the world of conducting as it features a few different genres, time signature changes and tempos. It is a vibrant, rocky, fast paced show that is definitely going to get you off your feet when you hear the music.

How have you found the rehearsal period?

I have often looked into the techniques of conducting but there is nothing like hands on experience. I have been going to rehearsals for a few months now so I can fully grasp the skills of controlling the cast and band.
There has been some great rehearsals and some difficult ones where conducting hasn’t gone quite to plan, however I utilized this as a chance to learn from my mistakes and grew from this experience.

How does conducting compare to being on stage?

It is a very different experience to being on stage as you can imagine. Instead of learning lines and practicing vocals for just my parts, I am instead learning the whole score which is a challenge. I have to understand every musical notation and annotation so I can correctly direct the cast and band with one hand and keep time with the other.
I’m pleased I get to work alongside an excellent cast and band for All Shook Up and I know they will work hard to create an amazing performance for you all. 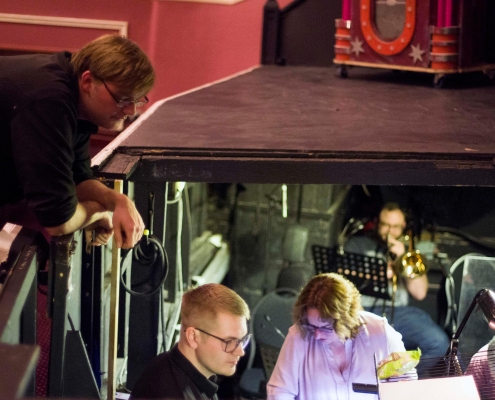 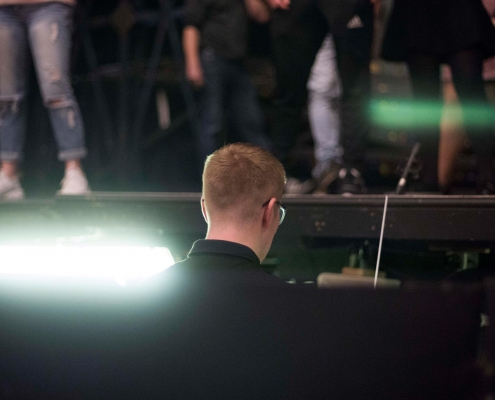 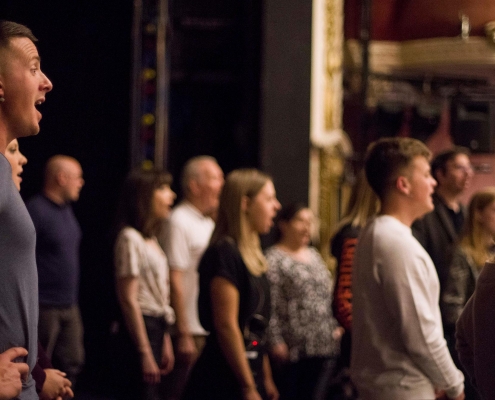 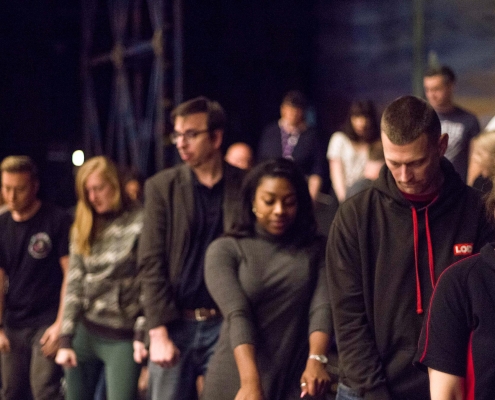 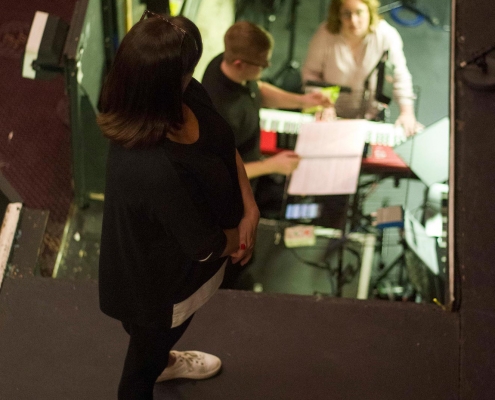 Only 5 days till LODS are performing All Shook Up to an Audience± We wanted to introduce you to the legend that is Sophie Cable – LODS Presents: All Shook Up: The Musical wouldn’t be possible without her!

What is your role for All Shook Up?

I’m a Production Manager, which is basically the role that oversees all the departments, to make sure the preparations for the show outside rehearsals are going to plan, schedule, and everyone’s happy. I work with my Co-Production Manager/fiancé Glenn, who is also the Sound Designer/Operator – he’s the tall one at the back of the theatre! Between us, we cover all the administration and technical details of the show, such as booking the set, scheduling, overseeing our amazing props department, who can source anything you ask for, (even a motorbike wing mirror!) and letting the crew know what to do.

I am also the Deputy Stage Manager, so I work with the director to record her vision in the form of all the show’s technical running details in a master script/score we call ‘The Book’, communicate that out to the departments as needed throughout the process, and then during the show I ‘call’ the cues via headset and cue-lights, telling various people when to carry out their cues so we all come together to make what you as an audience see.

How did you get into it?

Stage Management is what I trained in, I graduated from Central School of Speech and Drama, and worked for nearly a decade as a professional stage manager, until health problems meant I had to stop. I came to LODS through Glenn, who has done Sound for them for many years, and whose Great-Uncle Alan was also a member way back in the day. I love getting to still do the role I love despite my health issues, in this wonderful family of people, helping make high quality shows. All Shook Up is the 4th LODS show I’ve worked on, and the 2nd Glenn and I have Production Managed. I’m very grateful to have found them. (LODS and Glenn!)

What differences are there between ‘amateur’ and ‘professional’ theatre?

In some ways they’re vastly different – in some they’re a lot closer than you’d think. LODS in particular drew me in to work with them through their quality and welcoming people. They create a sense of family within the society, which mirrors that close-knit community created on any professional show, but instead of disbanding once the run is done, they just keep going, and keep creating wonderful shows together. Everyone wants to be there, its not ‘just a job’ for anyone – and that love and commitment shows.
Their quality is exceptional. I have to admit that sometimes in the professional world, ‘amateur’ is thrown around as a bit of an insult – having now worked in it, I would never use it that way. The hard work and love that’s thrown in, combined with the high standards of the whole company, cast and crew, make for such high production values and performances. I remember being really surprised when I saw my first LODS show, and now I’m proud to bring a few tricks of the trade to help out. All the people you don’t see, working backstage, are just as stellar as those onstage, and they’re so great to work with.

It’s also much harder in some ways, amateur – the time spent on the show in rehearsal is stretched over 6 months, but when we get into the theatre, we put in the set and then do an astonishingly short amount of rehearsal in situ. We get 4 hours to do the technical rehearsal, then we run the show once the following night, then the audience sees it. This is part of why the planning we do as production and stage management is so crucial.

What does All Shook Up have for us in terms of production?

We have a beautiful set hired from Scenic Projects, I guess it doesn’t give too much away to say Act 2 is set in a disused fairground, which is the basis for a lot of the set – we don’t get our hands on it until Monday, but what we’ve seen looks really beautiful. Joshua Blows, who lit Copacabana and Spring Awakening, is returning as Lighting Designer and he always creates beautiful scenes. I don’t want to give too much away, but when Chad comes into town and lights up the life of the town, we hope to reflect that – and of course he comes in on a motorbike! And what you don’t see but hear, the band and sound department will be making those toes tap throughout the show.

BUY TICKETS FOR ALL SHOOK UP

This site uses cookies. By continuing to browse the site, you are agreeing to our use of cookies.

We may request cookies to be set on your device. We use cookies to let us know when you visit our websites, how you interact with us, to enrich your user experience, and to customize your relationship with our website.

Click on the different category headings to find out more. You can also change some of your preferences. Note that blocking some types of cookies may impact your experience on our websites and the services we are able to offer.

These cookies are strictly necessary to provide you with services available through our website and to use some of its features.

Because these cookies are strictly necessary to deliver the website, refuseing them will have impact how our site functions. You always can block or delete cookies by changing your browser settings and force blocking all cookies on this website. But this will always prompt you to accept/refuse cookies when revisiting our site.

We fully respect if you want to refuse cookies but to avoid asking you again and again kindly allow us to store a cookie for that. You are free to opt out any time or opt in for other cookies to get a better experience. If you refuse cookies we will remove all set cookies in our domain.

We provide you with a list of stored cookies on your computer in our domain so you can check what we stored. Due to security reasons we are not able to show or modify cookies from other domains. You can check these in your browser security settings.

These cookies collect information that is used either in aggregate form to help us understand how our website is being used or how effective our marketing campaigns are, or to help us customize our website and application for you in order to enhance your experience.

If you do not want that we track your visit to our site you can disable tracking in your browser here:

We also use different external services like Google Webfonts, Google Maps, and external Video providers. Since these providers may collect personal data like your IP address we allow you to block them here. Please be aware that this might heavily reduce the functionality and appearance of our site. Changes will take effect once you reload the page.

The following cookies are also needed - You can choose if you want to allow them: